On the Bench: ’51 Zenith Porthole “Aldrich”

Rich from New Zealand sent in this beautiful ’51 Zenith Porthole for restoration. Aesthetically gorgeous, and very complete. This model is known as the Aldrich.

Upon removing the back cover, first thing that I saw was a brightener attached to the CRT which is usually an ill omen. I hooked up the Beltron to check the condition of the CRT, and surprisingly it had emission at 6.3v, but not much. Cleaning (not rejuvinating) the gun brought the CRT up into the useable range with a decent life test. That’s great news!

After checking out the condition of the CRT, I attempted a slow power-up using the variac. I could tell something was off right away, since there was not enough current draw being indicated on the ammeter. All of the filaments were lit at full AC power, except one. The 5Y3 tube, which is a secondary B+ rectifier located on the divorced power supply chassis, was quite literally “nuked” inside. The plate structures were actually melted and looked like the aftermath of an atomic bomb blast. Someone had plugged this in and let it run with something short-circuited in the chassis somewhere. Not a good sign at all, because this usually spells disaster for the power transformer. Most likely we have some shorted filter capacitors (very common) but I won’t be able to assess the condition of the main transformer until the chassis is removed from the cabinet.

These pictures are definitely lousy. I didn’t have a regular camera with me and wanted to document the unpacking process, so enjoy these grainy cell-phone camera snaps. 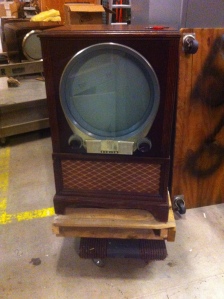 View all posts by stellartv